When I was around 13 years-old, FM radio was just starting out. The stations were few, and usually played classical music.
But that was in the heady days of "album rock". The emerging FM stations distanced themselves from the bubble-gum music by playing long sets and entire albums.
One station I started listening to had both an AM and FM spot on the dial. I took two old radios, tuned each to the same station on FM and AM. My Dad told me that was actually "Stereo".

On Sunday mornings while I was hanging out in my bedroom that station played something completely different; lectures by a brilliant man I had never heard of, about philosophy that blew my fuckin' mind.
That man was Alan Watts.

Born in London in 1915, Watts studied East Indian philosophy, Buddhism, Taoism and Zen. He hung out with Joseph Campbell, composer John Cage, and CG Jung.
Watts had a masters degree in theology and served a brief stint as an Episcopal Minister before moving to California and immersing himself in Asian studies.

In California, Watts split his time living on a houseboat in Sausalito, and at a secluded mountain cabin. His iconic lifestyle was challenged at times; he was criticized for not spending long sessions in seated meditation. He went through a series of marriages and rejected certain issues of personal morality in favor of societal morality and relationships between people and nature.

Watts was known to have experimented with Mescaline, LSD and marijuana. When asked about drug use years later, he commented "When you get the message, hang up the phone".

40 or more years have gone by since I heard Alan Watts' voice and philosophical ramblings.
Recently, I've been frustrated at not getting decent radio reception while working on farms, gardens and orchards on our remote island. I decided to buy an I-pod and listen to downloads.
So who do I stumble across again? Alan Watts.

There is something mystically reassuring about Watts' voice and philosophy, and I'm glad we found each other again.

Somehow, in December we get "Free Market Jesus", who sells us stuff on the TV to give to kids programmed to believe in Satan Claus.

Please take note on how the Prince of Peace no longer speaks of social justice and brotherhood, the new message is "The enemy wants to destroy you personally, destroy your family".
That enemy should be the darker side of human nature, in which case one would look over the deep introspective cliff of Ego.
Instead, the easier demon is "the other".
Muslims.
Welfare.
Gays.
Some other guy who worships a different version of Jesus.

Hey, I've come to respect MMA for the spectacle of the times that it is. But isn't there a mixed message here?

As I recently heard a comedian say; I can appreciate Jesus, I just don't care for some of his fan club.
Posted by Dojo Rat at 7:48 AM 11 comments: 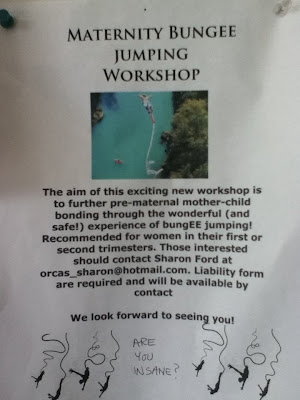 No shit.
This poster was on the bulletin board at our local market. At first I thought it was a joke, but it has an e-mail address attached for information and liability forms.

In case you can't read the print, it's aim is "to further pre-maternal mother-child bonding" through Bungee jumping.
"Recommended for women in their first or second trimesters".

First of all, I have heard that the last thing you want to transfer to an embryo is a huge amount of terror-induced stress that, let's say, a hundred-foot fall might induce.

Note that at the bottom someone wrote "Are You insane?"
Posted by Dojo Rat at 8:49 AM 1 comment:

I know posting has been a little light lately, lots of summer stuff going on.
Saturday was our annual BBQ at the Saloon, and it was great! Lots of people set up tents and a bunch just passed out in their cars. These things tend to go from 5 pm to 5 am. 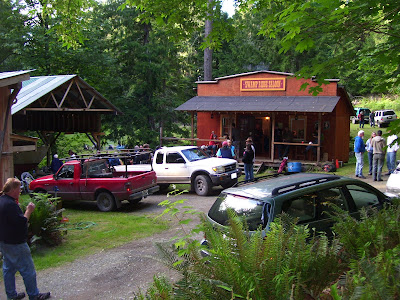 One gas grill, one smoker BBQ, more than enough food for sixty people. No complaints from the neighbors, most of them were there. At 1 am I told the crew to keep the electric guitars down to a mild hum, it seems to have worked. 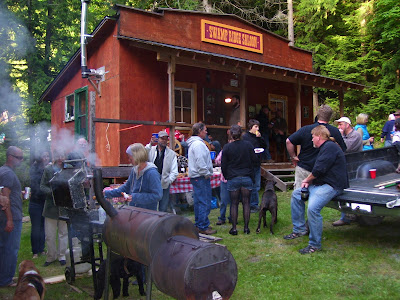 I'll be posting when I can, but there are a few big projects that have to be done in the next couple of months. This includes bringing in a portable saw mill and turning a log deck into beams and lumber for the cabin, and getting at least four cords of firewood cut.
Luckily we have a Saloon to rest our old bones and have a shot and a cold Beer after the work!
Posted by Dojo Rat at 7:04 AM No comments:

Email ThisBlogThis!Share to TwitterShare to FacebookShare to Pinterest
Labels: Annual BBQ at the Saloon 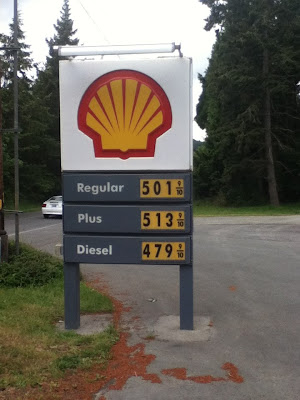 Well, this is the price we pay for living on a secret undisclosed island hideout; we pay more for everything. Gas just hit $5.00 for regular.

However, this scenario will be reversed when the economy comes unglued again.
That's right, Wall Street and London Bankers have driven the global economy into the ground.
Coming to an urban neighborhood near you: austerity driven poverty and civil unrest.

Email ThisBlogThis!Share to TwitterShare to FacebookShare to Pinterest
Labels: survive the crash

Ok, let's all put our shirts back on and take in some more lock-flow drills demonstrated by our training partner Corey:


This flow transitions between kote gaeshi and nikkyo, with a thumblock in the transition.


Now a little more complex. Note the transition to the "escort" hold, this is the hallmark of this flow.

And here's where Corey credit's these flow drills:

"Joint Lock flows 1-7 were learned from Leon Jay, Will Higginbotham, and developed by Corey Wiscomb. These were recorded in May of 2001" 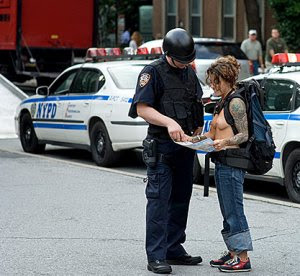 Well it seems that New York City is becoming a mecca for women to go topless. A while back we put up the photo above, of a cop giving directions to a topless girl.

Now we have the video below, this time of a topless girl being interviewed. The video goes a little long, but is worth watching to see the reaction of the repressed Jesus-freaks that say she is doing something evil and against Biblical principles.
I suppose those folks already live in their own self-imposed Hell.