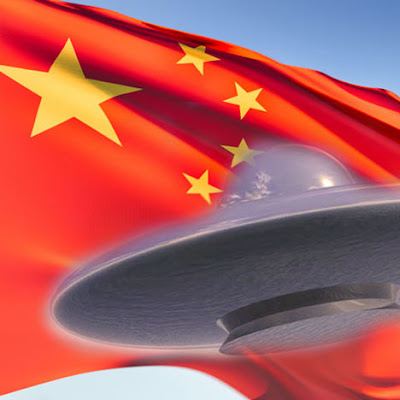 As China evolves into a quasi-capitalist society, long kept secrets are now being discussed. There are stories of giant red-haired warriors mummified with weapons and great wealth. There are huge pyramids that nobody can explain yet.
Now there have been a number of articles I have come across that have alleged ancient pictures and drawings depicting UFO's and strange aircraft: 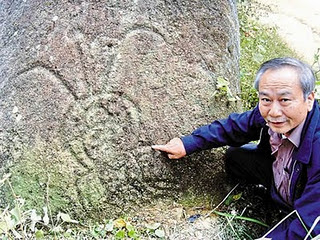 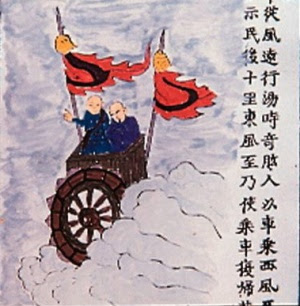 Now here's a really interesting one:

Here's a close-up of the writing:

I have no idea if these drawings are faked or actual evidence of ancient UFO's in China, but if the one with the alien writing is real, it makes one wonder...

Here is a link for a bunch of recent articles about UFO's in China
Posted by Dojo Rat at 9:20 AM 4 comments:

Email ThisBlogThis!Share to TwitterShare to FacebookShare to Pinterest
Labels: Ancient UFO's in China

The Corruption of Corporate Sports In November we took a look at "Why Martial Culture is not "Jock Culture", touching on the Penn State rape case and sports riots reflecting the hive mentality of the cult that is high-dollar sports.

In a brilliant follow-up on "AlterNet", Lynn Parramore writes "When Cults Collide: How Big Sports and CEO Worship Threaten Societies". Here are a few excerpts:

The Church of Football
"Big Sports in America, along with the corporate religion of CEO-worship that infuses it, exhibits cult-like features that make the tolerance of criminal activity something we should expect. When cults collide, conditions emerge that are poisonous to healthy, law-abiding, open societies."
*
"In his essay “The Sporting Spirit,” George Orwell outed the cult-like aspect of large-scale sports, which arose in the 19th century in England and the U.S. in a way the world had not seen since Roman times. He debunked the myth that serious sports was nothing more than good clean fun. Sure, it’s possible to play harmless games, but when losing means shame for the whole group, barbaric instincts surface. The competition takes on the character of warfare, where winning is the virtue, and getting in the way of winning is the vice. Intense rivalries beget a culture of cheating. Serious sports aren’t about fair play, concludes Orwell, but rather “hatred, jealousy, boastfulness, disregard of all rules and sadistic pleasure in witnessing violence: in other words it is war minus the shooting.”

Along with the rise of nationalism, big time sports grew as heavily financed activities that could draw huge crowds and inspire extreme loyalty. People learned to identify with larger power units and to view everything in terms of competitive clout. Organized games flourished in urban communities where workers lived sedentary and confined lives without much chance of creativity or physical release. Cursing the other team on game day was an outlet for pent-up sadistic impulses."
*
"College sports mega-programs, like football and basketball, are not built to nurture good and useful citizens, but to produce athletes who can draw in money through ticket sales or athletic boosters. Many of the values that make people good citizens, like sympathy and mutual support, are antithetical to the goals of sports teams. Programs receive millions of dollars of public funds, very often at the expense of education. The norms and values of the cult and those that make for a healthy society diverge.

Cults share several tell-tale characteristics, such as ritualistic activities, active recruiting, promises of reward or fame for converts, expectations of sacrifice for the group, and threats of humiliation and punishment for lack of compliance. And they always have charismatic, authoritarian leaders."

Parramore draws an apt comparison to elite CEO culture in American corporations, University Presidents and the obscene corruption found in both venues.

One For The Bagua Guys

This is somewhat obscure, but I find it really interesting; two examples of Bagua from Sun Xikun's lineage.
While based on Cheng-style Bagua and with an emphasis on grappling applications, these demonstrations by masters are completely different. The first is an unknown master because I can't read Chinese:


Now here is Master T.Y. Pang doing the same Bagua steps. Pang is the local Tai Chi Chuan and Bagua master that lives in our area, and I have been fortunate to meet him and visit at his house. This is the style of Bagua our Dojo practices. Note the fluid movement, the tight coiling and supple nature of the movements.


Master Pang trained directly with Sun Xikun, and judging from the age of the master in the previous video, I assume he may have also.

So what accounts for the difference in style? Pang is young in his video, but even at his age now, his unique movements are still present.
Sun Xikun style Bagua is rare, and it's interesting to see these two interpetations.
Posted by Dojo Rat at 8:53 AM 3 comments:

The Bait, The Rat, The Trap, The Axe and the Beretta 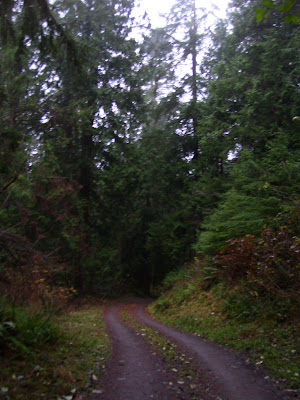 This time of year is often constant "Twilight" up here on our little island in the north. Our homestead will be dark and shady until late February when the sun returns to our small valley.
This got me thinking about rainy, drunken nights in the Pacific Northwest and the crazy stuff that happens at times.
Years ago I had a girlfriend that lived in an old houseboat. Now, anyone that has lived near the water knows that huge rats live in the rivers and sloughs around here, and they can be a problem. In this case, the owner of the moorage had put rat poison out, which can also be a problem because other animals can either eat it or eat the rats and get sick. It's not pretty.
Basically, some rat poisons use a blood thinner like warfarin coumadin, which human heart patients take to thin their blood. The rats blood thins and I imagine they die from hemorrhaging.
This makes them get cold, especially if it's winter, and they try to get into a warm house.
So one night a bunch of our friends were all hanging out with a few cases of beer in my girlfriends houseboat. I had some old coyote leg-hold traps, the kind that will take a finger off if you trip it accidentally, and I had set them on her back deck hoping to kill a few rats.
Over the noise of drunken humans, we heard the snap of a trap outside and we ran out to kill rats. Sure enough, one was caught up to his shoulder in the steel-jawed trap, and I took a mighty swing at it with my axe.
As my aim was guided by many Beers, I clipped the rat and tore it's arm off.
Bad swing.
The three-legged rat dove off into the water, leaving it's arm in the trap.

The next day while I was at work, my girlfriends daughter screamed from the bathroom of the houseboat; a rat was climbing into the insulation around the hot water heater.
You see, the poison had thinned it's blood and it was trying to stay warm.
My girlfriend got one of our buddies off the dock and gave him her Beretta .22 pistol to shoot the rat, which he did.
I asked about the incident later in the day, and he told me he had shot the rat and threw it into the water outside.
He said the rat was still alive and was trying to swim away.
And there was something else:
The rat only had three legs.

So that rat had been poisoned, trapped, hit with an axe, shot with a Beretta .22, and thrown in the water to drown.
But it swam away...
Posted by Dojo Rat at 9:24 AM 10 comments:

Lately here at Dojo Rat we've been exploring martial themes in popular movies, and this is a great example; Paul's fight with Feyd (played by Sting) in "Dune".

For those not familiar with the series of novels by Frank Herbert (a local writer from my corner of Washington State) here's the plot in a nutshell:

Paul Atreides is heir to a noble family that is sent to the desert planet Arrakis (Dune) to investigate the conspiracy to manipulate the most valuable commodity in the Universe: the mysterious "Spice", which allows users to fold time and space.
There are betrayals and double-crossing, giant "Sandworms" and a native resistance army of "Fremen" which aid Paul in his fight against the enemy Harkonnen clan.

Paul appears to be the long-prophesied messiah of Fremen legend, and the movie climaxes with this fight between Paul and Harkonnen Feyd-Rautha (Sting).

Author Frank Herbert is brilliant in his knowledge of desert culture, the occult and martial arts. Film director David Lynch distanced himself from this project after release, as aspects of this dark film were controversial and mostly appealed to followers of the book series.

What brings this video to Dojo Rat is the fight scene above. Not so much for the techniques, but for the Ki-ai which Paul uses to explode Feyd at the end of the fight.
As martial artists, we are taught to use the Ki-ai shout as a sign of intent, strength and intimidation. A weak Ki-ai sounds pathetic, a strong ki-ai takes years to perfect, and may change in subtle ways depending on use.
I read an account of an Aikido expert somewhere in the wilderness of Norway who was attacked by a moose. With no other choice, he let out a huge Ki-ai. Allegedly, the moose was dazed, staggered and briefly fell over.
I believe it. I have used the Ki-ai in similar ways. One time I was training for my first Black-Belt test and was running through some farmland in a California town. As I ran by one farm, three big dogs came out on the road and began to chase me. Well, there was surely no way for me to outrun the dogs, so I turned, stood my ground and let out the most vicious Ki-ai I could.
The dogs stopped in their tracks, turned around and ran back to the farm. The same thing happened on a dark rainy night walking down a street in Portland.

It seems clear to me that we cultivate Ki, or "Chi" for health and strength- which makes it available for use in stressful times. The Ki-ai is a great example of an expression of true intent and can be a valuable tool.

You can read more about "Dune" at this Wiki link.
Posted by Dojo Rat at 9:31 AM 4 comments:

Email ThisBlogThis!Share to TwitterShare to FacebookShare to Pinterest
Labels: Chi, Dune, The Power Of Ki-ai

Cute Hippie Chick of the Month: Down on the Farm 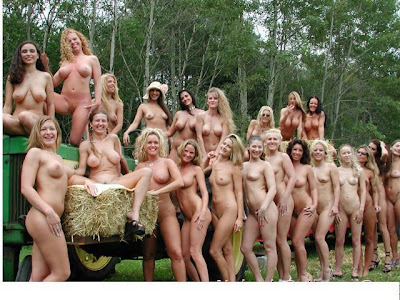 Yessiree!
Down on the farm all the harvest is in, and it's time to get down to some chores!
Posted by Dojo Rat at 10:27 AM 4 comments: