From The Daily Mail, U.K.

"This waiter will be the toast of Greece - after he was caught on camera accidentally tipping five glasses of beer down German Chancellor Angela Merkel's back."

"Merkel's reaction at the Demmin Christian Democratic Union meeting last week was in stark contrast to when then U.S. President George W Bush took her by surprise with a shoulder rub in 2006.
That incident, also caught on camera and which became a YouTube sensation, saw her recoil in horror."

She should have elbowed Bush in the Nuts...
Posted by Dojo Rat at 9:49 AM No comments:

Email ThisBlogThis!Share to TwitterShare to FacebookShare to Pinterest
Labels: Angela Merkel, George idiot Bush, no use crying over spilled Beer

A Bridge Too Far 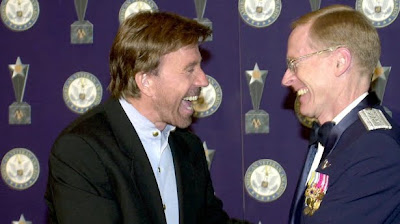 Oh bless my DNA.
How long has it been since we have thrown mudpies at Chuckie?
Apparently Norris, also known as "Prime Chuck" or simply "Chump" is so famous in far away Bratislava that he just may have a famous bridge named after him:

From Reuters news, via Raw Story

"BRATISLAVA (Reuters) – Slovaks have been voting overwhelmingly in favor of naming a new pedestrian and cycling bridge near their capital for 1980s action film and TV star Chuck Norris.

The two other top names in the running for the bridge, which will span the Morava river and cross the border to Austria, were Maria Theresa after an Austro-Hungarian empress and the Devinska cycling bridge in honour of the closest village."
(snip)
"The final decision will be up to a regional assembly. But regional Governor Pavol Freso has said it would follow the wishes of the people in the Internet ballot where Norris leads as the top choice for the bridge’s name."
(snip)
"The voting will run until April. As of Thursday, 1,157 votes have backed Norris, 74 percent of the total, leaving the runner up ‘Maria Theresa Bridge’ far behind with 8 percent." 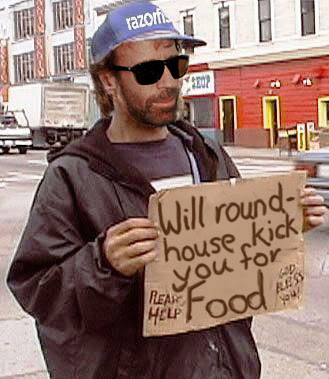 Well, as far as I'm concerned, Chuck might just as well move to Bratislava.
After all, he actively supported the movement for Texas to secede from the United States:

“In what could be the most egregious misuse of his Chuck Norris powers” since he endorsed Mike Huckabee, said Edward Ericson Jr. in the Baltimore City Paper, the martial artist and TV star suggested that Texas was ripe to secede from the union, that he ‘may run for President’ of the Republic of Texas, and that there are thousands of “right-wing ‘cells’” ready to follow radio host Glen Beck’s marching orders."
(snip)
“Texas tried to cut out once already,” with the rest of the Confederacy, said Bud Kennedy in the Fort Worth Star-Telegram, and it was an epic failure. Norris’ main beef seems to be that we have “a secular government,” and he blames both parties. “Gosh.” Well, before we get all excited and “gather arms to establish One Nation Under Chuck,” we should check his eligibility: He may be a Texas Ranger, but he’s also a native-born Oklahoman."
(link)
-----------------

Actually, it would be just fine for me if the entire state of Texass moved to Bratislava... 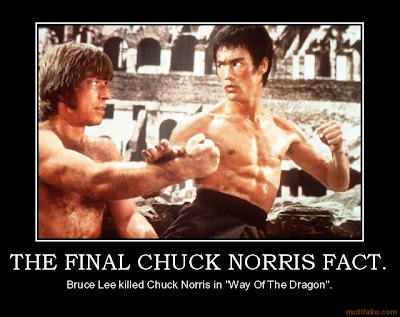 Email ThisBlogThis!Share to TwitterShare to FacebookShare to Pinterest
Labels: Bridge in Bratislava, Chuck Norris, Get out of here Chump

Credit to Jonathan Bluestein at "The Rum-Soaked Fist" for posting this one.

According to the article in The British tabloid "The Sun", trouble maker Les Andrews confronted Gulf War veteran Jason Smith, 35 at his residence. Smith's wife and infant daughter were in the house at the time. The article states that Smith is trained in Karate and Jujitsu.
In my opinion, Smith takes an inordanite amount of shit before he takes this guy out. He patiently demonstrates to his neighbors that he is not the aggressor, as the guy is close enough to give him a head-butt or knee strike. Smith waits in the at-ease position a little too long, but he unloads on the idiot with classic left-hand Karate reverse punches.
Oh what a treat it is to see the punk slink and crawl out of Smith's yard.
At the time the article was printed, the video had 200,000 hits, currently on YouTube the hit count is 3,195,643.

Punks beware of Martial Masters with Beer Guts!
Posted by Dojo Rat at 8:59 AM 4 comments:

When You Outlaw Chainsaws, Only Outlaws Will Have Chainsaws


When you outlaw Chainsaws, only outlaws will have Chainsaws...

"The video shows Dinnen -- who was boozed up and on drugs at the time -- waltz casually into the pub, flailing his weapon and holding it near patrons' faces. He was looking for a man who had thrown him out for lighting a cigarette inside the pub, despite a smoking ban in the area, several news outlets reported.

But customers weren't having it.

Bar patrons armed themselves with kegs, pool cues and barstools, flinging them at Dinnen from a distance. He ripped open the arm of Adrian Pryor, 32, with the chainsaw, but realized during the melee that the guy he was actually looking for had already left."
Posted by Dojo Rat at 10:39 AM 4 comments:

Some of the absolute best martial arts seminars I have been to were with Tim Cartmell when he visited Seattle. Over several years I attended Tim's Bagua, Taiji and Xingyi sessions, and one on MMA for the street. Tim lived, trained and competed in Asia for many years, returned to the States and earned his Black Belt in Brazilian Jiu Jitsu.
He has also authored and co-authored many valuable books on Chinese martial arts, some of which I have.

Above is a sample of Tim's "Ground Proofing" video, which he says is designed for the non-grappler to get a handle on what to do when a fight goes to the ground.

Watch how Tim moves in a relaxed fashion with efficient, controlled skill. He outlined many devastating throwing techniques in his book "Effortless Combat Throws", and it has been said that Tim has a "heavy body" for his size. This is clearly because of his intense knowledge of leverage and scientific principle while manipulating opponents bodies.

You can get a copy of this DVD as well as others (I have his excellent video on Standing Grappling) at his website for Shen Wu at this link.
Posted by Dojo Rat at 10:27 AM 2 comments:

George Orwell on the Militarization of Sports 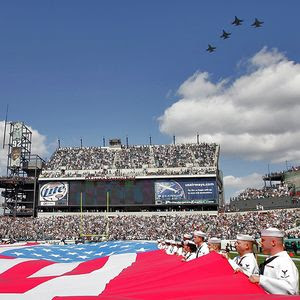 Today is the annual fist-pumping-scream-fest known in America as The Super Bowl. Or should I say "Stupor Bowl".
Millions of chickens will give up their wings. High-fructose corn syrup will rain from the sky, clinging to the sweating brows of obese former high school athletes.
Bud and Bud Lite will battle on the field of crappy Beers.

I wrote in November that Martial Culture is not Jock Culture.
The "Art" of martial arts and even the challenge of man-to-man sparring is something intensely personal, while (especially "corporate") team sports (read football) provide that false sense of patriotism so necessary to gather the people around empire. 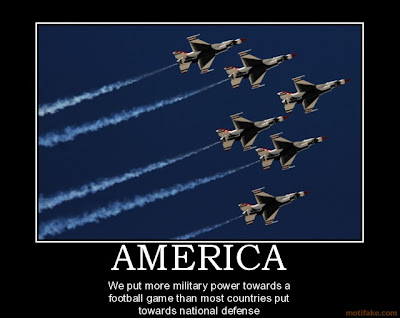 George Orwell, famous for his novel "1984", wrote a stunning essay on this type of sports in 1945.
Keep in mind that when Orwell mentions football, he is referring to European soccer.
Now, I am not fully in agreement with Orwell, for instance he lumps Boxing in with team sports in his critique. I disagree with that, but let's see what you think. Here's a few excerpts, you can read more at the highlighted link above:

"Nearly all the sports practised nowadays are competitive. You play to win, and the game has little meaning unless you do your utmost to win. On the village green, where you pick up sides and no feeling of local patriotism is involved. it is possible to play simply for the fun and exercise: but as soon as the question of prestige arises, as soon as you feel that you and some larger unit will be disgraced if you lose, the most savage combative instincts are aroused. Anyone who has played even in a school football match knows this. At the international level sport is frankly mimic warfare. But the significant thing is not the behaviour of the players but the attitude of the spectators: and, behind the spectators, of the nations who work themselves into furies over these absurd contests, and seriously believe — at any rate for short periods — that running, jumping and kicking a ball are tests of national virtue."
*
"Serious sport has nothing to do with fair play. It is bound up with hatred, jealousy, boastfulness, disregard of all rules and sadistic pleasure in witnessing violence: in other words it is war minus the shooting."
*
"Even in the English public schools the games cult did not start till the later part of the last century. Dr Arnold, generally regarded as the founder of the modern public school, looked on games as simply a waste of time. Then, chiefly in England and the United States, games were built up into a heavily-financed activity, capable of attracting vast crowds and rousing savage passions, and the infection spread from country to country. It is the most violently combative sports, football and boxing, that have spread the widest. There cannot be much doubt that the whole thing is bound up with the rise of nationalism — that is, with the lunatic modern habit of identifying oneself with large power units and seeing everything in terms of competitive prestige. Also, organised games are more likely to flourish in urban communities where the average human being lives a sedentary or at least a confined life, and does not get much opportunity for creative labour."
-------------------------------------------------------------------------

Sound familiar?
Posted by Dojo Rat at 9:32 AM 3 comments: 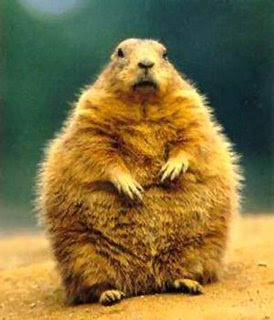 Being as today is Ground Hog Day, I thought this might be fun; but I am giving away a secret so back off if you are planning a visit to a Zen Monastery...

Years ago a friend of mine wanted to straighten out his life and checked himself into a very famous Zen Monastery here in the U.S.
There were gardening and cleaning tasks assigned, but the entire rest of the day was in seated meditation.
He said they would sit there in a large group and count each breath to ten, and then start over again. He got so frustrated he started counting every breath, into the thousands for each meditation session.
He felt he was going crazy and went to the Abbot and requested a meeting.
Am I going crazy?
No, it's supposed to happen and it will pass...
So back to the routine.

After a couple of weeks the Abbot made an announcement to the group; tonight there would be a movie shown to the group as a treat for all their hard work.
The group gathered and the Abbot put the movie on; it was Bill Murray's "Ground Hog Day".
Everybody loved it and it was a refreshing break from the weeks of silence and introspection.

A week later the Abbot announced that the group was doing so well that there would be another movie. Of course, everyone was in thrilled silence, and gathered in the viewing room.

The Abbot put on the movie:

It was "Ground Hog Day".