Does Time Slow Down For Elite Athletes? 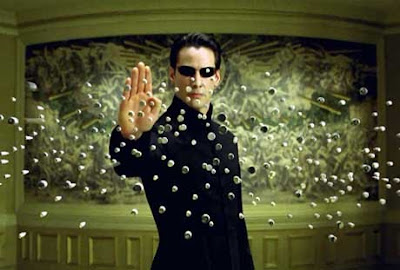 I think many of us have been in "the zone" where a perfect technique is in play at the exact right "time".
The following article from Discovery.com attempts to put it in scientific terms, but something is lacking.
What is lacking is a realization of separate realities, which may occur during times of stress, mystical experiences, or in athletics.

There is something a deceased friend who appeared in a dream told me: "All time happens at the same time".
It will give me something to ponder for the rest of my life, and possibly beyond.

Does Time Slow Down For Elite Athletes?
Analysis by Sheila Eldred
Sat Sep 8, 2012

It's not just talent: preparing to leap over a hurdle or dunk a basketball makes the brain process information differently. The athlete perceives it as a slowing down of time, say researchers at University College London after a new study.

"John McEnroe has reported that he feels time slows down as he is about to hit the ball, and F1 drivers report something very similar when overtaking," Dr. Nobuhiro Hagura from University College London's Institute of Cognitive Neuroscience told BBC News. "Our guess is that during the motor preparation, visual information processing in the brain is enhanced. So, maybe, the amount of information coming in is increased. That makes time be perceived longer and slower."

The researchers tested the theory by asking subjects to react to flashing discs on a screen in two different ways: either to tap the screen, or just watch. The group that tapped the screen reported that there seemed to be more time between the flashes. And, the more prepared the participants were, the longer the time seemed to stretch.

That last finding leads the researchers to postulate that elite athletes may have a greater capacity to experience the perception than the general population.

Future experiments may include professional athletes, as well as an experiment to find the physiological mechanism that makes the phenomenon happen.

"We now want to do these behavior experiments again while measuring the participants' brain activity with electroencephalography," Hagura told BBC News. "We can then look at what is happening in the visual cortex during the action preparation period."

My teacher calls it "slicing time", it just takes practice. They're just starting to scratch the understanding of this? It's nothing new.

http://tracelesswarrior.blogspot.com/2006/09/slicing-time-perception-of-time.html
Search his blog for several posts on it.

I believe the concept of sensitivity and "listening" with tactile and visual cues is how CMA practitioners train for this type of thing. Some internal CMA masters appear to be able to do this. They'd tell you that they are not fast, yet they can react to attacks from younger fighters who are in much better shape.

Part of it might just be the way a mind adapts to handle stimuli most efficiently. Tennis players and baseball players have to train their minds to expect 100+ mph stimuli. When I was in little league, we were told not to play wiffle ball because it would "throw off our timing" ... and I remember that it did.

I'd love to see a study which examines if baseball and tennis players drive faster than others, since a 55mph speed limit must seem awfully slow to them.

Yes, well known, not only in CMA but also Daoist/Buddhist meditative studies. Maybe that's the source of "you move, I arrive earlier", no?

I haven't had the perception that time has slowed down during some action, but I frequently have the experience that I have enough time to move with ease.

I my self experienced this several times. I've seen things moving in slow motion and sound extends, it happened when I observed car accidents that happened in front of me.
I asked a pilot about it once, and he said to me that my senses are alert at certain times.

Very Very good and usable post. Thank's to share your experience with us. I will try to remember these tips in my blog commenting task.