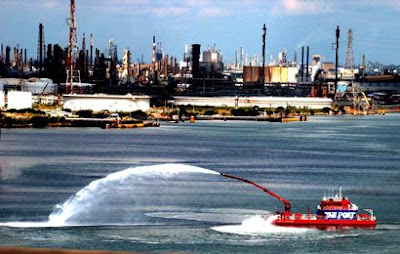 The Port of Corpus Christi, Texas

Back around 1979, we had a guy from Texas come and train at our Tae Kwon Do school. I'll call him "Buzby", which was actually part of his name.
Buzby was about ten years older than me. He was only about five-foot seven, but had a pretty stocky build. He was also balding, had a wandering eye, and spoke with a heavy Texas accent. But he was tough. For some reason, he always fought from a side stance, as many people did back then. I think it was because the side kick was his best weapon. Buzby had a Gi (Karate uniform) that was dyed army green, which stuck out in a sea of pure white Gi's that other students had.
He said his school in Texas, an Okinawan style, practiced outside so much they dyed their Gi's to mask the grass stains. I know he had held a higher rank, but in our school he just wore a white belt.

Buzby explained to us that Texas Karate was practiced a little differently than what we were doing in Portland Oregon at the time. There was lots of outdoor woodland training, hence the dyed green Gi. There were also different testing procedures. One day, while Buzby was working as a heating and air conditioning technician he got a call from his Karate instructor. His instructor told him to come immediately to a well-known Bar in a rough part of Corpus Christi. Buzby wondered why, but said "No problem, I'll be right there".
Buzby walked into the Bar and his eyes adjusted to the dim light inside. Even though it was daytime working hours, the Bar was full of bikers and oil rough-necks.
He spotted his instructor and walked over:
Instructor: "Buzby, you know so-and-so from the Karate school across town"?
Buzby: "Hi, nice to meet you".
Instructor: "And this is his student, so-and-so".
Buzby: "Hi".
Instructor: "And Buzby, you're going to fight his student, right here, right now".

Well, Buzby told us the story and we were glued to his every word:
"The other guy had been waiting and was ready, I was caught a little off-guard. But we fought right there in the Bar. It seemed like forever, but it was probably only about a minute. We were knocking over tables and chairs, and we both got hurt a bit".

(Us, listening): What happened?

Buzby: Our instructors stopped the fight, and they both seemed pretty satisfied with the results. I think they were testing us, to see if we had the nerve to do it".

-And they all sat back down at a table and ordered another round of Beers.
Posted by Dojo Rat at 8:18 AM

The Texas martial arts scene has always been pretty rough.

Several of my TSD instructors told me that Chuck Norris never went to Texas to fight because of how rough it was.

Of course, when I was a kid in Connecticut, they said the same thing about the NYC martial arts scene. "Don't compete in New York. Wait for the New York fighters to come here. (New Haven, CT.)"

I'm sorry Sean, but we all know Chuck Norris makes the state of Texas itself shutter in fear.