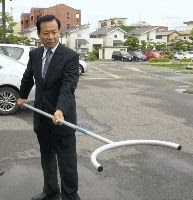 New innovations of an old tool are coming into use for security threats. The Sasumata is known as "The man catcher", and was recently used in a Japanese school to trap an attacker with a knife.

AICHI —
Police on Monday were called to an elementary school in Ichinomiya, Aichi Prefecture, after a man illegally entered the premises carrying a kitchen knife. It is believed the 62-year-old man walked into the school by the open front gate at around 7:40 a.m. before the children had arrived and was then challenged by the school principal and teachers.
When they realized the man was armed, three of them decided to use a “sasumata,” a two-pronged device similar to a “man catcher,” which was a type of forked pole weapon used in Europe up until the 18th century. Police said the teachers used the weapon to pin the man down until they arrived. Police said that no-one was injured in the incident."

Example of Sasumata in use: 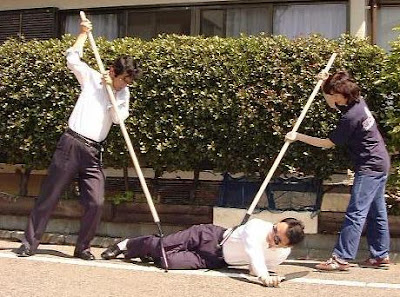 Again, from the "Japan Today" article:

"According to eyewitnesses, the man was first spotted on the premises by a female teacher, who informed the principal. The principal attempted to address the man, but the man just unwrapped a newspaper bundle he was carrying to reveal the kitchen knife. The principal said he instructed staff to fetch the fork-like tool, following which three teachers surrounded the man and held him in place using the weapon. Police quoted the suspect as saying, “I came here to threaten the children.”
The “sasumata” was originally used during the Edo era for apprehending suspects. Modern variants of the “sasumata” are made for use by mounted riot police and are designed to significantly reduce the chance of injury to restrained civilians. The school principal told police that he and his staff had performed training drills using the man catcher in preparation for just such an incident. “Our preparations really paid off in this instance,” he said."

Anybody have a link to buy?

How to make hair bows said...