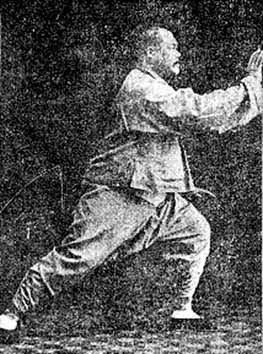 Bob over at "Striking Thoughts" and "The Urban Samurai" have been exchanging posts on Fundamentals and Basic training, so here's my two cents:

Structure, Structure, Structure.
In my early days of Karate training I got my first two Black Belts in Tae Kwon Do. Great exercise, bad structure. Crappy fight strategy.
There was too much hip-hopping around and flashy head kicks and jump-spin-shit. A grappler would decimate them.
At a Wing Chun seminar several years ago, my training partner Corey was paired up with a big body-builder guy. The big guy had fast hands and Corey couldn't penetrate his defense. Instead, he closed on the guy and gave him your basic Tai Chi Chuan push that threw the guy across the room and into a Wing Chun Dummy. Really took the wind out of his sails. So while the big guy had good handwork, he had no root to the ground, and was easily defeated. 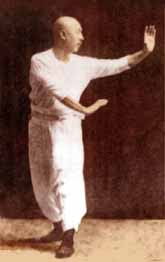 The Bridge
The above picture is of a Bagua Master. Initially, you might say it doesn't look like a powerful or rooted stance. But what we see is a classical flanking technique unique to the art.
Note the structure in the extended arms. All the best defenses use "The Bridge".
The Bridge remains extended, like a bubble you encase yourself in. If someone is attacking, you move your stance to accomodate the attack, but the Bridge remains intact. Before I learned this concept, it was possible for opponents to collapse my guard and trap the arms. Use a good, structured Bridge!

A Few Powerful Techniques
Above is the "San Ti" posture from Xingyi. Good structure, good root.
Five basic techniques. That's right, Five. All the advanced techniques in Xingyi are minor variations of the Five Elements.
It is generally agreed on that Gross Motor Skills are what works in the chaos of an attack.
My friend was at a wilderness medic seminar while working at the fire department. There were three Navy Seals that were also in the week-long class, and they were about to be shipped off to Iraq.
The Seals would get up every few hours and do a little sparring to take a break from the bookwork and medic training. I asked my friend what techniques they used. It was nothing more than western boxing, and low stomp kicks. They would work their way in and get their opponent in a choke, and it was all over.
That's about five techniques; Jab, hook, cross, low stomp, and choke.
More thoughts on this subject coming up later...
Posted by Dojo Rat at 9:49 AM

Hi dojo rats
Very interesting post on the importance of structure! I'm waiting for the " more to come". The "bridge" aspect of the extended arm in hsing-i and bagua are of first tactical importance. (as in other arts of course). You're kind of "calling" for the grab or strike...while remaining stable and structured inside. Seems like a basic evidence but, as you say, these simple, yet deep and fundamental truths seems to be the core of internal arts. When you start to explore this bridging side, from all kinds of angles and entries, a lot of things become more clear. My teacher spent a lot of time clarifying this for us.
Thanks for all these interestings posts
Erwan , a regular reader from Brittany-France
(please pardon my english)

ooh! i am certainly looking forward to more in this series on structure. This was a great post.

incidently, the photo of the bagua dude making a bridge... I think that flanking technique is what we call, "release #1" in our aikido classes ;-) When I watch videos of the walking the circle thing, I see a lot of what we call releases, just done walking in a circle instead of done with a partner.

and youre right - there is a lot of subtle power in the structure there.

Hi Erwan and Pat.
Thanks for your thoughts.

Pat, I would like to see a short video of release #1 if you can put one together.

Interesting about the Seals!

Infantry, Seals, special ops, etc. all get extended hand-to-hand. The rest of us got a lesser version of the H2H. When I was in we were taught a few basic punches, a few basic blocks, two kicks, and two throws. I hear now that they've added a few BJJ submission holds but except for that, the formula remains the same.

As a medic I was assigned to a mechanized infantry unit. Back at the armory we had the chance to partake in boxing. Also, some of the scout platoon had extended training -- either in the army or from commercial schools.

As for the rest, Bagua, Xingyi, and Aikdio are all on my martial arts wish list. It's only a matter of when I move...

DR - I could put together a video of the releases (and may still do it) but Nick Lowry has already put that material out there. I think this one might be a good one to start with.

check it out and surf around his channel for anything named "release" and you'll see a lot of examples of the releases we play with.

A certain awesome and handsome aikido guru did a definitive work on the first release motion.

That being said, I personally have been looking at that bagua stance and having fantasies about throwing ashi harai. Betcha a dollar I could do it.

I myself do not see the correlation between the bagua move and the first release, but it is not the first time Pat and I do not agree. The first release demands an aligned posture, hand in front of center.