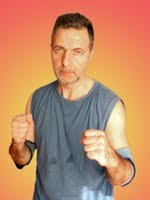 Good news!
Kostas Tountas, our fellow Dojo Rat from Greece has recently returned from fighting at The Dog Brothers Euro Gathering in Switzerland. For those who don't know, This tournament mixes stick fighting with other martial arts. There are very few rules and only light padding for protection.
I will let Kostas describe the event without further meddling by me, except to say Kostas should be very proud to have competed, done so well, and pushed the envelope of his training to a new level. Congratulations Kostas! 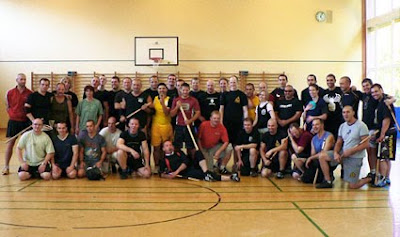 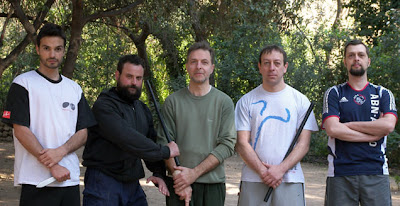 Kostas Tountas with the Areos Park Kali Group
Posted by Dojo Rat at 8:02 AM

Kostas: You are a good storyteller. Thanks for recounting your experiences. They are especially interesting as I prepare for my first gathering. - Howie from Philly

Thanks Howie...I shall look forward to reading your account. Remember, fighting at your FIRST Gathering is a once-in-a-lifetime experience...enjoy it!

most amazing ...I am truly impressed with the stature and honour that is shared amongst participants. I find it a very refreshing perspective to know that respect is a larger part of the fight than ego....and the will to fight the clean fight is the larger part of valor.I always knew you to be a strong and passionate person,and honorable....a heart of gold.....bravo kostas... congratulations!

Thank-you very much, for your kind and encouraging words. I did find many of the people there to be very helpful, yet able to fight hard. I think that it had something to do with quite a few of them being older, and more experienced in the arts. Nonetheless, as fight time approached, many people did feel the tension, but there was always a good feeling over-all. I'm glad for the chance to have been a part of it.

Hi Kostas.
Thank you for your sight of the Gathering. It helps me, to prepare myself for this years Gathering.
This year I will be there for the first time. We will see us. :)

Alex, thank-you for the positive feedback. I was there this year also. I am sorry our paths did not cross. Perhaps next year. How did it go for you?

Don't forget to post an update for all your fans and followers ;-)

All the Best Kostas
Kevin

Very cool write up! You captured the spirit of what DBMA is all about and wrote about it in a very positive and uplifting way. Keep up your journey!

Thank-you Tim..I have continued the journey..I am now a Full Dog Brother :)

Greetings I hope to spar you in California one day. This was a good article.